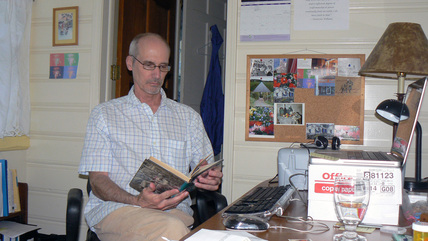 Writers Colony at Dairy Hollow-Eureka Springs AR
Richard Jespers is the son of a jet mechanic who served his country in the South Pacific theater of WWII, the descendant of generations of Dutchmen who tended butcher shops, one whose door sported the Queen of Holland's official seal. Richard's mother trained to be an elementary school teacher, whose only pupils were himself, his sister, and his brother; through his mother's family, he is a descendant of John Howland, who traversed the Atlantic via the Mayflower. One grandfather fought in France in WWI and returned to Kansas to become a successful wheat farmer. The other grandfather eschewed the notion of competing with several brothers and came to America from Holland in 1911 to run his own butcher shop in suburban New York City.

Richard can scarcely remember the two years he lived in Louisiana when his father was in the Air National Guard. The rest of his youth was spent in Kansas. Having grown up in a small house near the banks of the Arkansas River in Wichita, Richard holds a bachelor's degree in music from Southwestern College in Winfield, Kansas, and a graduate degree in English from Texas Tech University in Lubbock, Texas.

At Southwestern he studied organ and served as senior assistant for the music department, an honor that afforded him the opportunity to teach a section of music theory (keyboard) to freshman music students. Beginning in 1974, he taught grades two through six for seventeen years in the Lubbock Public Schools. His master's degree in English from Texas Tech University was comprised of a dual emphasis in composition/rhetoric and literature. He used this academic preparation to his best advantage while teaching English to gifted-talented students at Lubbock High School for the last ten years of his career.

Since 2005 Richard has published stories in various journals [see Stories] and has recently finished writing a novel. He lives in Lubbock, Texas, with visual artist Ken Dixon. For better or worse, they have maintained an under-the-same-roof relationship since 1976. For more about Richard's writing life/career click here.

-Tennessee Writers Award 2005 for story "Bathed in Pink"
-Pushcart Nomination 2008 by Richard Burgin, Boulevard editor, for "My Long Playing Records"
-Among the winners of The Ledge's Fiction Competition, for "Engineer"
-Awarded two-month residency by Writers Colony at Dairy Hollow in 2009